Once upon the time in a Middle-Eastern Kingdom, a new infectious disease appeared which looked like a Flu but more critical, remembering SARS a long time ago.

After a while and by using alternative ways, a new virus was identified in the family of the Coronavirus who is responsible for respiratory syndrome. It was called MERS CoV in reference to the first location: Middle East.

It took some time to learn more about this virus: where is it coming from? How is it spreading and infecting ?

As of today, virology brought on the table and media clear evidences with phylogenetics. Step by step, study after study, virology helped epidemiology to start understanding MERS CoV better and better.

The coronavirus was previously hosted by bats then more recently move to camels in Africa, mainly horn of Africa before jumping to Middle East following camels herds and markets close to Jeddah port, the main region for importing camels from Africa (Soudan,Ethiopia,Somalia).

MERS is a zoonosis, spreading recently from animal (camel) to human then from human to human under certain circumstances in link with environment and pre existing medical conditions.

Closed locations (confined space) like household or hospital ICU are known to spread infection. People with cardiac, respiratory or kidney failure, diabetic or immunosupressed disease are more subject and vulnerable to MERS.

The fatality rate is 40% based on recorded cases but might be lower around 20% of the entire infected population (see recent South Korea nosocomial outbreak).

As a zoonosis, the most likely way to get MERS CoV is by handling or touching camels, their milk, meat or urine. Once introduced in human being, contamination can occur by close contacts through droplets or fomites. Hygiene including hand washing and sanitation, cough etiquette or facial masks are key factors to prevent contamination. 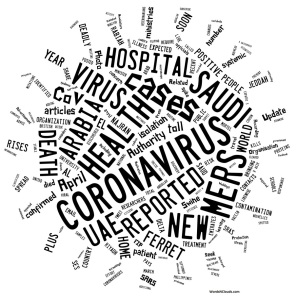 Difficult to fight cultural issues in an area where camels are beloved animals like cows are in India. How to inform, train camel herders, farmers from getting too close from young and juvenile calves? Because in addition to environtmental and health factors, there is another key factors for spreading the virus during childbirth at winter/spring season. Yes, there is a seasonal cycle for MERS outbreak!

Surprisingly, the second likely place to get coronavirus is at the hospital. Health care workers, patients hospitalized or their visitors have been exposed and contaminated leading to a huge and repetitive nosocomial outbreaks. At everytime a gap in the infection control prevention has been observed due to lack of knowledge and training.

Fortunately, human to human transmission is low with mostly two generations but no more. The recent outbreak in South Korea has demonstrated that one imported MERS case is responsible of 186 cases and 36 deaths. But most likely, one infected patient contaminates one or two People only.

So far, no treatment and no vaccine are available !

The only way to avoid spread of MERS CoV is by preventing contact between young calves and infected camels with human body. No more but no less…looking forward R&D of a vaccine (animal or human ?).

Time for One Health issue by combining veterinary and global health watching the emergence of new diseases and zoonosis.